If you want to continue to see what we are up to please go to:


We have just begun to write the new blog but we'll get better, promise!!!
Posted by Grey Hound at 6:11 PM No comments:

As some of you may already know, after 12,610 miles on the water and 13,000+ miles via trailer over the course of 7 years we have made a change in venue.  The days of trailering, stepping our own mast and driving all over the eastern part of the US is now behind us.  The last night on board our beloved Grey Hound was New Years Eve and then the next day we pulled her from the water and hightailed it to IL.  The new owners were waiting with a smiles on their faces!

First to summarize our recent changes:


Over the next week we will be starting a new blog and end this blog.  Stand by for the next generation of fun on Nati.

Friends are all around us in Stuart

How many lives does a cat have?

On Refuge they have a cat named Tiller.  As you can see he knows no fear.....he likes going around the mooring field keeping an eye on everything.

He is pretty good at keeping on dry land but he missed the dinghy the other day and Don had to fish him out with the fish net. 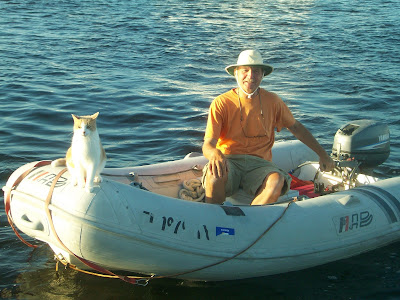 The Chief & Millie came into town for a few days and we did as we said............tried to eat our way through Stuart!  Not sure if we accomplished it but I feel 10 lbs. heavier!

On the day after Christmas the marina put on a brunch for the cruisers.  Someone in the marina has a son who is a chef locally and he wanted to put on the meal & what a brunch it was!!

- Shrimp & grits (the best ever & I think a Binnacle must have!!)
- Eggs with prosciutto
- Fruit of all kinds
- Sawmill biscuits and gravy (again the best!!)
- Drinks with vodka (your choice chocolate or whip cream)
- Croissants
- Scones
- and much, much more than you can ever eat.........lots of fun for everyone!! 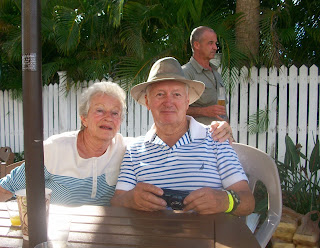 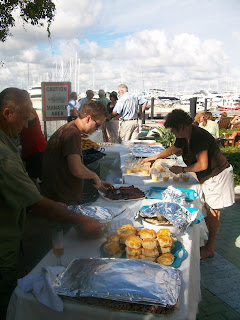 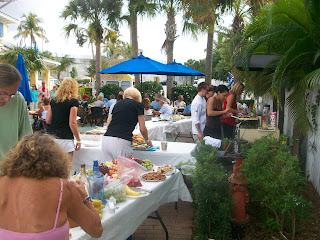 We are on a mooring in Stuart Florida this weekend and are hanging out with the Chief & Millie.  They came across the state the other day and we'll try to eat our way through all the restaurants in town.

We wish everyone an enjoyable peaceful MERRY CHRISTMAS  for 2011 and a HAPPY NEW YEARS.

Posted by Grey Hound at 7:12 AM No comments:

Goodbye Melbourne ....we are heading south to Stuart

We have had a great time over the past week hanging out with Jean and Tom.  With their Cougar (1986 vintage) we were able to do all the chores that were needed to be done.  We even were able to see SU beat NC State!

We were anchored just across from Eau Gallie Yacht Basin and they let us shower, park the car and get water from the marina.  Karen, dockmaster is great to deal with and we will certainly go back there.

We had a fun visit from M/V IAMJEANIUS on the last day.  She sure looks like a fun boat to hang out on and she was also spotless! 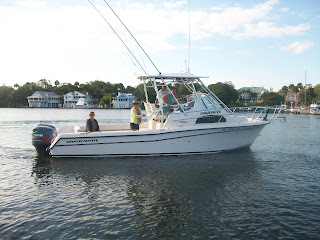 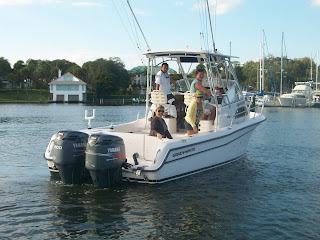 Next stop is Stuart where we will meet up with the Chief & Millie for Christmas!

After a nice sail we anchored in Eau Gallie Basin and it was like old home week.  Almost to the day we were in here for our very first sail down the east coast 3 year ago.  The basin is small and some question the holding but we have a nice shallow spot right across from Eau Gallie Yacht Basin.  The marina is great and has allowed us to have showers and to moor the dinghy there.  Jean & Tom has lent us the "cougar " for a couple of days so we can do a good job at provisioning.

The area is like a zoo at sunset!  We have our own manatee hanging out along with a couple of dolphins fishing nearby.  We also have ospreys everywhere, pelicans learning to fish (I am trying to get a video of this action), egrets all over and there is an owl somewhere.

Oh yes, the homes and boats are decorated for the holidays, we get to see it all!! 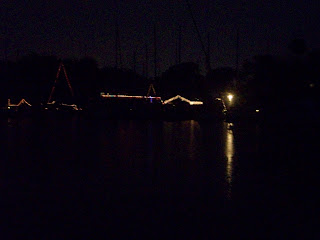 The best sail since the Chesakpeake!  Onward to Melbourne.....

Posted by Grey Hound at 7:25 AM No comments:

We catch the 10:30 bridge to head out to the inlet and when we get there all we see is white.  As in white, large breaking waves covering the entire inlet.  We have already enjoyed Winah Bay Inlet along with St Andrews Inlet and were really thrilled about another wet, bumpy, "lets toss everything in the air" Inlet so we turned around and headed south the "other" way, as in the ICW.  The sailing isn't as much fun but it is still enjoyable to see the landscape, particularly since this is our first time.  As a side note when we caught the 11:00am bridge the other way a boat moored next to us the night before went out and a half hour later I called them.   They did go out but had already decided we made the better choice.  They said it was very ugly and would have come back but once in the current going out they had no choice but to keep going.

We did get to go by Fort Mantanzas on the way south.  It is supposed to be a cool visit but that will have to be another time. 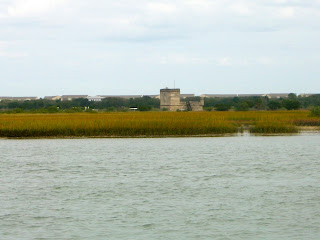 We end up in Sea Ray cut for the night.  The Sea Ray factory is right on the water so it was interesting just to see the boats in the water.  We did have a very peaceful and quiet night. 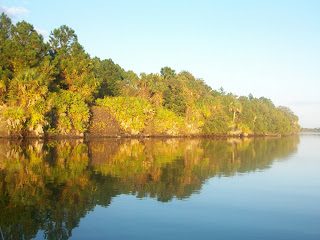 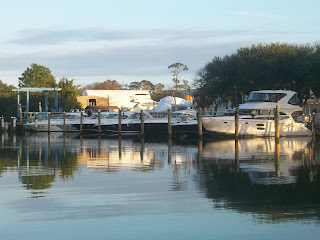 The next day we did a long run on the inside (63 miles) and like normal we always see rather unique living arrangements.  Now this boat had no roadside dwelling near it and it appeared to be basically tied to a few stakes in the ground.  But it seemed to be home to someone! 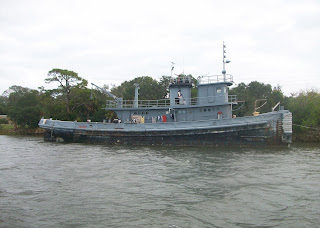 Just at dusk we pulled behind a railroad bridge near Titusville for the night.  Unknown to us at the time we picked a very nice place for the night as we were able to see a beautiful moonrise and in the morning we also had a nice sunrise.  The huge building in the sunrise is the Kennedy Space Center and a launch platform (I'm assuming for the shuttle) is beside it. 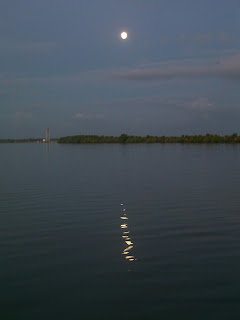 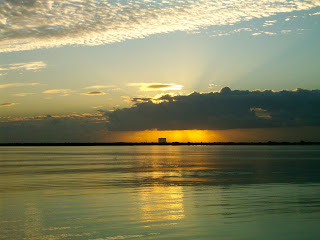 Posted by Grey Hound at 7:19 AM No comments:

After our night visit with the Kadey Krogen over the night we headed down to Jacksonville Beach and had a great night at Beach Marina and then it was a quick run to St Augustine.   At Beach Marina they really like boaters.......in the morning they dropped a newspaper right on our net!  Now that is cool....

On the way across the St John's river we decided to give a slightly larger vessel room to get by us.  I do think it was a good idea! 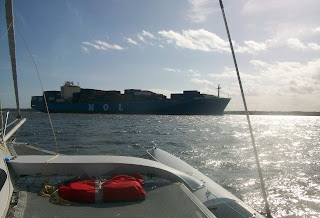 We have heard great things about St Augustine and it hasn't let us down.  The municipal marina has a large number of mooring balls and they are much further apart than those in Fernandina Beach.  Overall they do a great job with a large dinghy dock, hot showers, a shuttle service to your boat during the day and the town is right at the end of the dock.

St Augustine is the oldest city in the nation (started somewhere in the 1600's and there are many old buildings to see.  It is too bad the cold front came through as it made it hard to get off the boat and at night it went back into the 40's.....burrrrrrrrr!!!   We will just have to come back.

When we got back to the boat this afternoon we had our new neighbor come for a visit.  We told them if they open the drapes and hand over the popcorn then we would be set.  With the current and the wind we actually got as close as 10 feet and then we pulled the bridle up tight and put the daggerboard down.  The tide will turn at 10pm and then we can go to sleep.

Caution:  objects can and will  appear closer then they are!

After grabbing a mooring ball we decided to walk around the town and what a great town it is.  The oldest railroad in Florida is here and a lot of "Peg Legs".


Christmas is in the air and it is still great to see palm trees with light on them.  Even the marina had decor up and the day was fun just walking around, seeing the sights and hanging out.  It is much nicer when you don't have to bundle up all day.

Recap of the last few days on Grey Hound

And all good plans can and will change!

Out of Georgetown at 7am.  Yes, Kismet, we actually did it!

Right now we are at Jekyll Island Marina.  The offer of super hot showers, power for our heater (low 30's tonight) and the ability to wash Grey Hound off after a 200+ sail on the North Atlantic was too good an offer.  We even had someone else cook tonight. 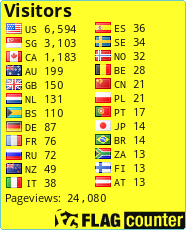